It’s hard to keep up with all the important happenings in this era of the 24-hour news cycle. That’s why we at ProgressNow Arizona want to make it easy for you to catch up on all the Arizona progressive news you can use. Whether it’s about how the craziness in Washington, DC affects us here in Arizona, what’s happening on the 9th floor Governor’s office, or how progressives are fighting to make Arizona better for all and how you can join in, we want to keep you in the loop. 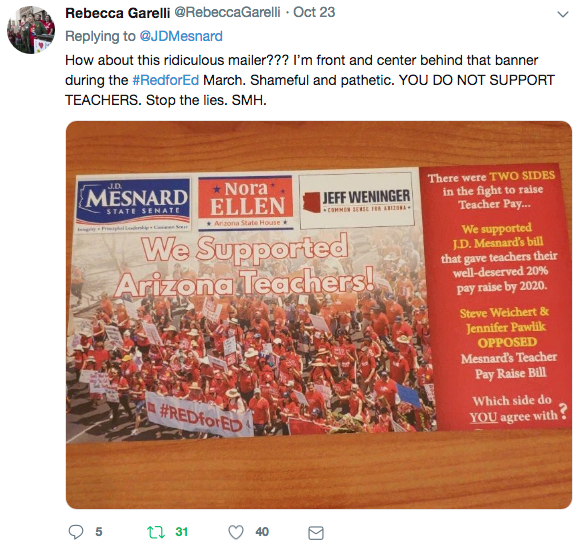 Republican amnesia. Arizona Republicans who didn’t support #RedforEd are now suddenly claiming they did. A mailer from JD Mesnard claimed he supported Arizona teachers with a photo from the walkout.Teachers quickly took him to task for lying.

How did they know? The full opinion on the Arizona Supreme Court ruling on the Invest in Ed ballot measure came out Friday, and the decision breakdown exactly matches what Ducey’s inner circle told reporters in the days after the decision. It raises serious questions of corruption and implies there is an unethical direct pipeline from right-wing Ducey-appointed justices to his campaign team. Read our statement here.

The #MAGABomber. On Friday, police in Florida finally apprehended the man believed to have sent 12 bombs to high-profile Democrats. His van was covered in right-wing, pro-Trump stickers. Many on the right have been pushing a dark conspiracy that it was a “False Flag” attack–including some Arizona Republicans.

Together we win. An uplifting new ad from David Garcia.

McSalty. Martha McSally doesn’t like being questioned about how she tried to take away people’s healthcare.

Independents leading the blue wave? This focus group of independent voters are almost all voting for Krysten Sinema and David Garcia, and are upset at legislators who didn’t support #RedForEd. Does this bode well for Arizona Democratic wins?

Get the facts and vote. Get informed on the candidates, ballot questions and local issues that matter to you by checking out this ballot guide.

Sign it. Seal it. Send it! We’re talking about your ballot. Mail it in by October 31 (any later and your ballot may not arrive on time!) If you miss the deadline you can drop it off at ANY polling place in your county!